Hit enter to search or ESC to close
News

By Travel to Brazil with experts April 9, 2018 No Comments

The ceremony took place at Embraer’s São José dos Campos headquarters in Brazil on April 4 and was attended by hundreds of representatives from the manufacturer, the Norway-based airline, suppliers and invited guests.

The aircraft, PR-EFL, was expected to be ferried to Norway shortly and begin revenue service later in April.

The E190-E2, which is designed to seat between 97 and 114 passengers, is one of three variants in the E2 family of aircraft.

Wideroe, which has three E190-E2s on firm order and purchase rights for a further 12 on the type, has configured the aircraft with 114 seats in a single-class layout.

“The E190-E2 is an impressive aircraft. It is the ideal airplane for Widerøe as we introduce jets for the first time in the company’s 84-year history,” Widerøe chief executive Stein Nilsen said in a statement.

“I am convinced our passengers are going to love the cabin, our operations people are going to embrace the new technology, while our financial collaborators will appreciate the economics the aircraft permits.

Embraer Commercial Aviation president and chief executive John Slattery said it was a historic day and thanked Wideroe for being the launch operator of the E190-E2.

“The delivery of this E2 marks a continuation of a real success story in global aviation,” Slattery said in a statement

“I’m also delighted to welcome Widerøe as our newest Embraer customer and want to thank Stein and his team for the support over the last year; working together with us as partners to deliver this airplane today. I’m planning on being on the aircraft when it first enters Norwegian airspace next week and really looking forward to that!” 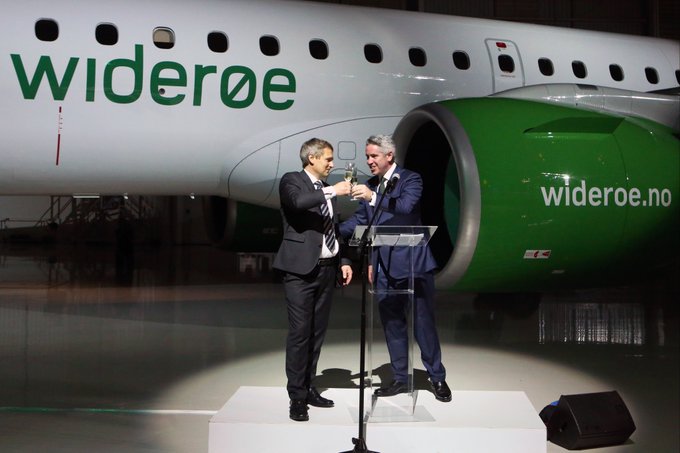 Looking at the other two E2 variants, the E195-E2 (120- 144 passengers) began flight testing in March 2017 and is slated for certification and entry into service with launch customer Azul Brazilian Airlines in the first half of 2019.

Boasting a range of 2,600nm, the E195-E2 is capable of operating Sydney-Bali or Darwin-Bangkok.

The trio will be powered by Pratt & Whitney PW1700G and PW1900G geared turbofan engines.

This was expected to result in double-digit reductions in fuel and maintenance costs compared with the current E-jet family. From an environmental perspective, the new aircraft also produced less emissions and less noise. The aircraft will also have a new interior with larger overhead bins and a new first class concept, among other interior improvements.

Indeed figures from Embraer showed the E190-E2’s fuel consumption was 17.3 per cent better than the current generation E190 during the flight testing program and a claimed “nearly 10 per cent better” than the aircraft’s direct competitor.

Compared to the first-generation E190, 75 per cent of the aircraft systems are new.

The E2 family of aircraft competes against Bombardier’s C Series jets and others in the up-to-150-seats segment that Embraer estimates will require 10,550 new aircraft over the next 20 years.