Hit enter to search or ESC to close
Brazil Airlines

By Travel to Brazil with experts April 10, 2018 No Comments

From CAPA – Center for Aviation

Brazil’s three largest airlines are forecast to grow their domestic capacity in 2018 at varying degrees as demand in the country appears to be on a stable upswing, after plummeting during the country’s recession that began in 2015.

Azul, GOL and LATAM Airlines Brazil believe the country’s domestic market is in a period of stabilization, with corporate demand finally starting to rebound. Azul and GOL both posted healthy increases in ticket prices at the end of 2017, which reflects a level of pricing traction in the market.

All three of those airlines are also expanding international capacity from Brazil this year: LATAM will add service to Rome, Las Vegas and Boston, and GOL is inaugurating service from Fortaleza and Brasília to Miami and Orlando, using Boeing 737 MAX narrowbodies. Late in 2017 Azul added new service to the US that will mature over the course of 2018.

As those airlines bolster service to the US, American Airlines, which is the largest operator between the US and Brazil, is cutting service between the two countries.

During Brazil’s recession the country’s two largest airlines GOL and LATAM Airlines Brazil slashed their capacity as demand vaporised. Brazil’s domestic passenger growth plummeted 7.8% year-on-year in 2016, regaining some ground in 2017 with a passenger increase of 2.2%. 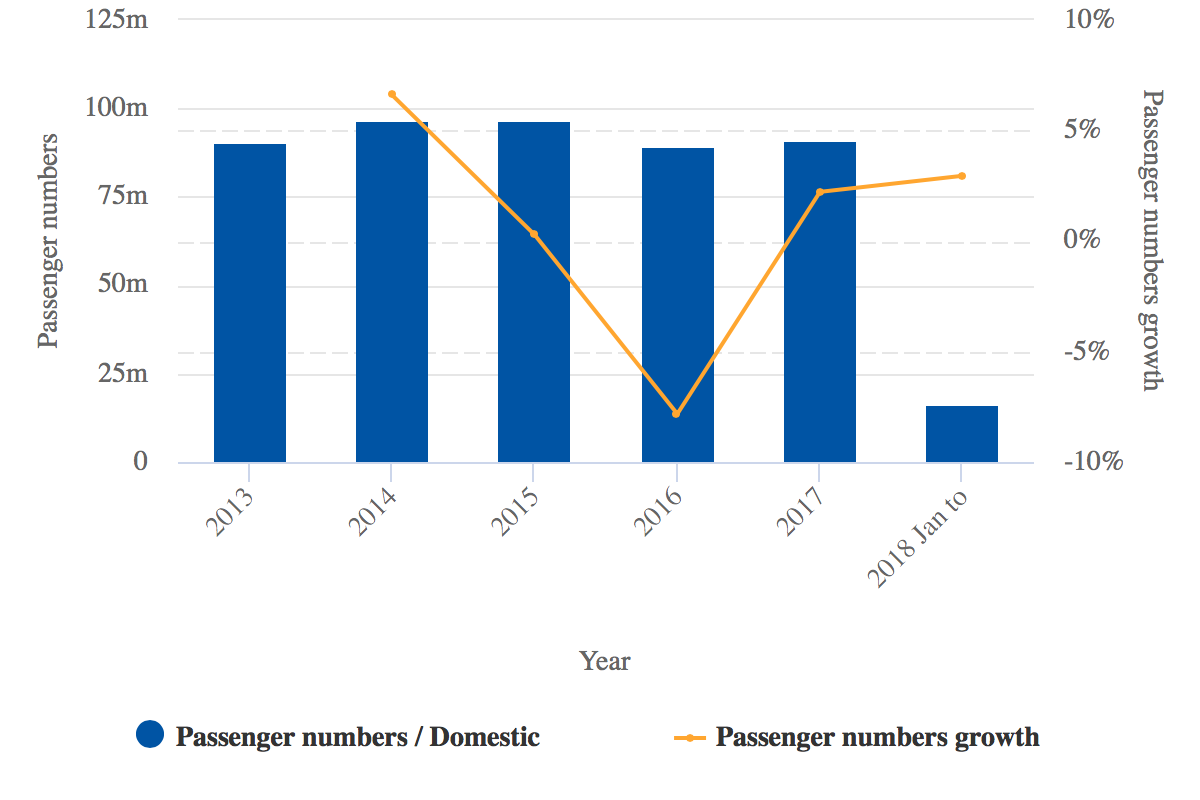 For the first time in close to two years, GOL and LATAM are planning solid capacity growth in Brazil’s domestic market.

Data from CAPA and OAG show that during 1H2018 Brazil’s domestic ASKs will remain below 2015 levels, but are projected to creep up in the latter half of the year. 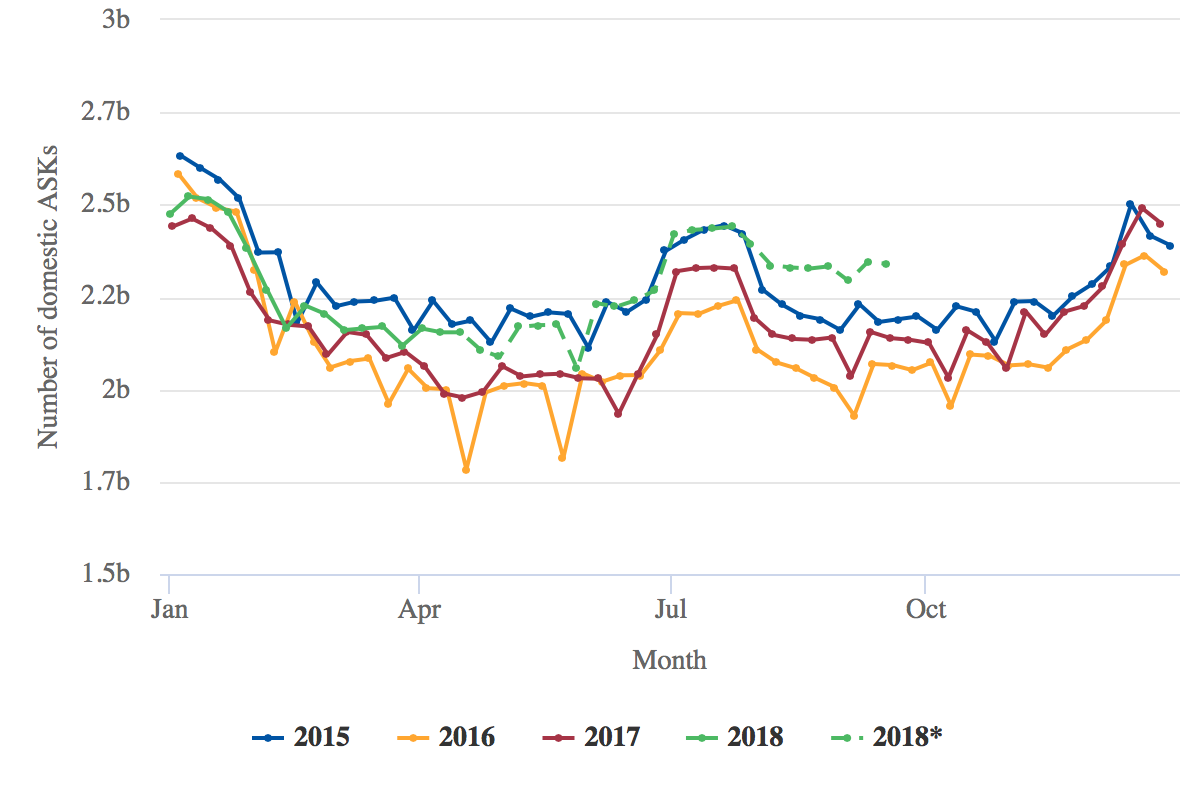 * These values are at least partly predictive up to 6 months from 02-Apr-2018 and may be subject to change.

Much of Azul’s domestic capacity growth is driven by fleet upgauging as it continues to add Airbus A320neos to its fleet.

Azul cited strength in Brazil’s domestic market during 4Q2017, particularly in corporate demand. For much of the quarter, booking inside 14 days were strong, the company has stated. It is a welcome development, considering that a rebound in corporate demand within Brazil has been uneven during the past year.GOL executives recently stated that the company believes demand for 2H2018 will remain solid as bookings for 1Q2018 were strong. The airline’s management ticked off a number of favourable conditions in Brazil, including lower interest rates and lower inflation.

The airline also believes capacity growth in Brazil’s domestic market is rational. Although Azul’s capacity growth could reach double digit levels, GOL has remarked that Azul is adding flights largely in markets where it does not operate.

Brazil is holding presidential elections later in 2018, but GOL’s management seems unconcerned about the effect on demand. In fact, they recently noted that demand typically grows in an election year.

Brazil’s airlines step up service to the US, even before Open Skies sets in

GOL is taking a major step in its international network in late 2018 when it launches service from Brasília and Fortaleza to Miami and Orlando International, using Boeing 737 MAX narrowbodies. Those route additions are driving GOL’s international 7% capacity growth to 10% in 2018.

GOL has served the US in the past, and believes the 737 MAX narrowbody is the right aircraft for the market.

The airline has previously stated that the MAX jets would allow it to grow “the international revenue portion of our overall mix from 14% to 15% today to around 20%”.

A big driver for Azul’s 55% to 60% international capacity growth in 2018 is the launch of flights from Belém to Fort Lauderdale and Belo Horizonte to Orlando in Dec-2017, and the introduction of service from Recife to Fort Lauderdale in May-2018.

The airline has stressed that its growth remains off a small base – only 24.6% of its ASKs are deployed into international markets – and considers its flights to the US to be low risk, while they also allow for connections from US partners United and JetBlue and its European partner TAP. 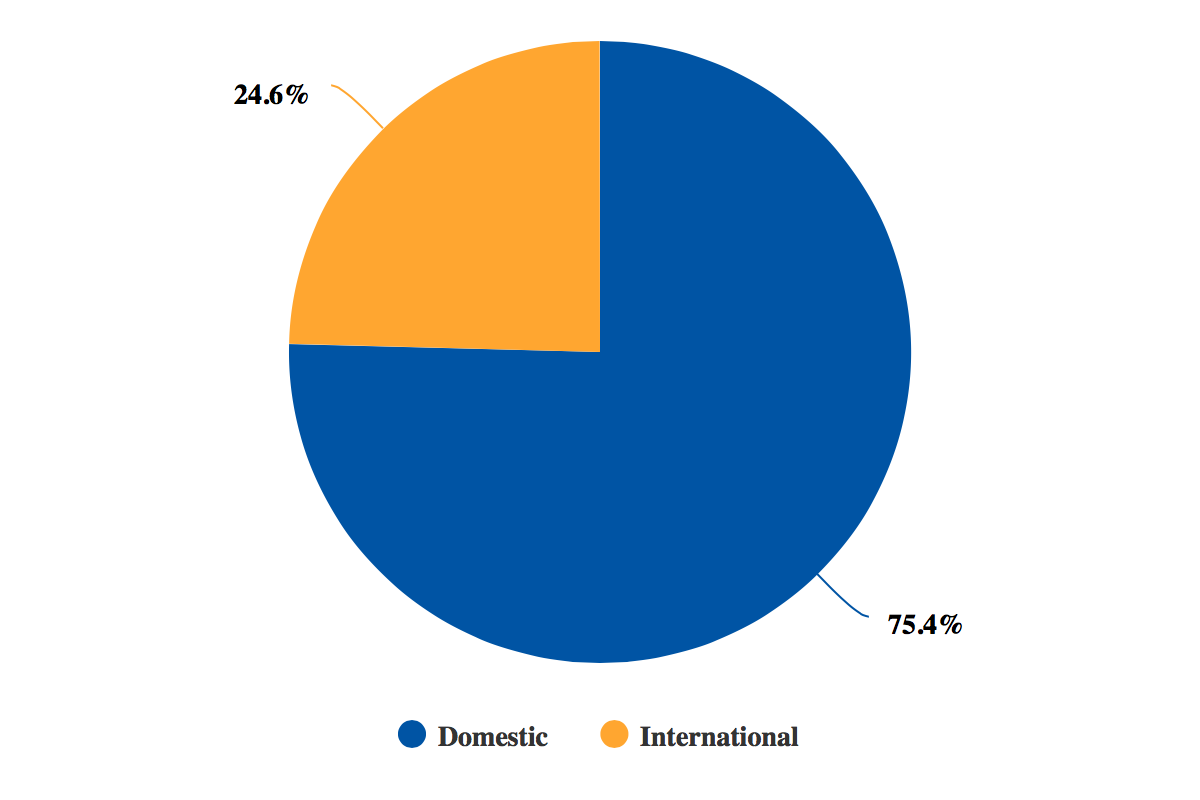 During 2018 LATAM Airlines Brazil is also making a push in the US from its hub in São Paulo Guarulhos, with seasonal fights to Las Vegasand year-round service to Boston. The airline is also adding flights from São Paulo to Rome.

All of the service additions by Brazil’s airlines to the US occurred before Brazil’s Senate ratified an open skies agreement between the two countries, which lifts restrictions on the number of flights airlines are allowed to operate.

Even before that ratification American Airlines, which holds a 33% seat share between the US and Brazil, cited some capacity creep in the market as unit revenues were recovering.

American is making some adjustments in its service profile to Brazil, cutting service from Belo Horizonte to Miami and from Dallas/Fort Worth to Rio. The airline is also cutting frequencies from Miami to Rio and São Paulo, and from Los Angeles to São Paulo.

Those adjustments are allowing American to add service elsewhere in Latin America, including new flights from Dallas/Fort Worth to Oaxaca, Los Angeles to Buenos Aires, and Miami to Córdoba, Georgetown and Pereira.

Latin America remains an emerging market, so American is working to deepen its network breadth with service to some of the region’s growing markets – particularly to Colombia and Argentina.

The changes do not signify any change in American’s commitment to Brazil.  American and LATAM Airlines Group are working to forge a joint venture between the US and several Latin American countries, including Brazil, so American’s service footprint will not change drastically.

Azul has also expressed an interest in creating a joint venture with United, which means the landscape in Latin America has the potential to change significantly during the next few years. The formalisation of open skies allows for those airlines to push forward with their immunised joint ventures.

Brazil’s airlines are showing no concern over the planned capacity growth in the country’s domestic market for 2018. There seems to be a match between demand and pricing traction that, for now, is a positive sign that the country’s economy is recovering.

As 2018 unfolds, markets will dictate if there is excess capacity between Brazil and the US, but Brazil’s airlines believe much opportunity is left to tap between the two countries ahead of joint ventures spreading to Latin America.